I found this amazing author years ago. I read her trilogy, The Blogger Diaries. Imagine my surprise when I found out that this incredible series was not just fiction but her very own love story. Then in 2019 I was able to meet her in person at Wanderlust San Antonio. I was beyond excited when she agreed to be one of My Blissful Books Spotlight Authors. So without further ado this is KD Robichaux.

1.​Let’s start at your beginning, The Blogger Diaries. What made you decide to open your personal love story up for the world to read and discuss?

I started out in the book world as a blogger, and then I became an editor and got super close to my authors. I was telling Erin Noelle and Aurora Rose Reynolds about how my husband Jason and I met, and they told me it sounded like a movie. They then proceeded to tell me I should write it as a romance novel, and Erin was the one who said to release it as a trilogy, since it would’ve ended up being a 300,000-word book LOL!

2. How did you go from The Blogger Diaries to the darker romances you write? Do you create a character first or do you have a muse who calls to you?

Well, there was one interlude between TBD and my Club Alias Series—No Trespassing. It’s a rom-com beneath the streets of New Orleans in the fictional catacombs there. The enemies get trapped down there and end up on a treasure hunt and end up falling in love.

After that, a character named Doc popped into my head (*evil grin). And he started telling me the stories about each of the members of his mercenary team. He’s a psychologist, a therapist who specializes in sexual assault victims, and let’s just say he got a liiiittle tired of their attackers literally getting away with murder. So he created his team to exact justice. First came Corbin’s story (Confession Duet) which is the darkest of the crew. Then came Seth’s (Seven) who is the comedian of the group. He’s most people’s favorite… (until they read Doc 😉 ) Then came Brian and Clarice (Mission: Accomplished, which is a fun and naughty boxed set of mercenary missions she meets up with him at while they’re still just BFFs with benefits. And then they get their happily ever after in Knight, their full-length novel). Finally, Doc just got his book after three and a half years of my readers begging for him. I had to save my personal favorite for last. And he is the dreamiest Alpha hero I’ve ever written.

The original series is now complete, but there will be several more books coming out in the Club Alias world. This week, I have A Lesson in Blackmail releasing on Friday (Oct. 9) and I’m pretty sure it’s my favorite *story* I’ve ever written. It’s a full-length novel in the Black Mountain Academy collaboration, which is made up of several different authors writing their book based at this rich-kid high school. Mine is about the bad boy Alpha senior (don’t worry, he’s 18) who will stop at nothing until he gets the school’s new librarian—even if it’s blackmailing her after finding out a super naughty secret.

I still go back and forth between rom-com and dark. I have a dark sense of humor thanks to having three big brothers and growing up in a military family/ town all my life. And there’s always a touch of humor even in my darkest stories (like Steal You and Number Neighbor, co-written with my sisterwife CC Monroe).

3. On a typical day how much time do you spend in your writing process?

I’m a full-time editor, so I schedule my writing time between edits. If it’s a writing day, I have no choice but to walk out to my Beauty and the Beast library my husband built me and lock myself away from my three kids, because it’s the only chance I’ll get to put words down. Jason makes sure to bring me meals, water, and coffee… lots and lots of coffee. He’ll bring the baby out to me to kiss goodnight, and I’m out there from sun-up to about midnight. I binge-write, and I’m a pantser.

4. How do you celebrate typing “The End”?

I usually buy myself one little memento. With Doc, I got myself the Harry Potter Vera Bradley crossbody bag. With A Lesson in Blackmail, I preordered the new BTS album coming out in November. Nothing crazy extravagant, but something I wouldn’t typically splurge on.

5. How do you deal with the emotional impact of a book (on yourself) as you are writing a story?

I don’t. I’m a hot mess with diagnosed ADD, OCD, and high-functioning anxiety. What is this “deal with emotions” you speak of? lol

6. Have you considered doing audiobooks?

I have one audiobook through Read Me Romance! It’s called Moravian Rhapsody and it takes place in my Club Alias world. I would love to do more, but that’s not something this family with three daughters can afford, because it’s crazy expensive to produce audiobooks as an indie author.

7. How many plot ideas are swirling in your head waiting to be written? Can you tell us about one of them?

Right now, I’m focused on my next story I have to write—Until Cece in Aurora Rose Reynolds’s Happily Ever Alpha World. She’s the sister of the heroine in Aurora’s Until Talon. While I was editing Talon, I told Aurora I *needed* to write Cece’s story. She just spoke to my soul. She even let me name Cece’s love interest in Talon (Winston) since we knew I’d be writing their story <3

8. What are must haves for when you write; such as music, snacks, etc?

Nestle Splash Lemon Water, a notebook, and my movie scores playlist. I can’t write to music with lyrics because I’ll start typing the words (ADD is super fun) so I love writing to the instrumental music in the background of movies. An orchestra called Two Steps from Hell is my absolute favorite and will actually make me cry if I have it too loud, because there’s so much passion in the melodies.

9. What has been one of your biggest accomplishments in your career?

What most people would call a career accomplishment—hitting International Bestseller with my book Scary Hot. What *I* consider my biggest accomplishment—I wrote two full-length novels in a total of 16 days. Doc and A Lesson in Blackmail poured out me until I wrote The End. IDK if I’ll ever let myself do that again though, because I didn’t see my kids for two weeks.

10. What is the oddest fan experience that has happened to you?

It wasn’t really odd. It was actually pretty freaking exciting. I was at a local shop, and a woman walked in with a Beauty and the Beast mask on. I obviously, being me, squeed over it and showed her my Belle tattoo. She looked up at me and said,“OMG, you’re KD Robichaux.” And after a second of my brain registering that she said KD and not Kayla, I confirmed that was me. She proceeded to tell me she’s read all my books and loved them, and then even offered to make me my own Beauty and the Beast mask, since she had sewn hers and had fabric left.

It was crazy getting recognized out in public. It’s happened a few times now, and it never gets old <3

KD Robichaux wanted to be a romance author since the first time she picked up her mom’s Sandra Brown books at the ripe old age of twelve. She went to college to become a writer, but then got married and had babies. Putting her dream job on hold to raise her family as a stay at home mom who read entirely too much, she created a blog, where she could keep her family and friends up-to-date on all the hottest reads. From there, by word of mouth, her blog took off and she began using her hard-earned degree as a Senior Editor for Hot Tree Editing. When her kids started school, and with the encouragement from her many author friends, she finally sat down and started working on her first series, The Blogger Diaries, which is her real life romance.

Title: Doc A Club Alias Standalone Author: KD Robichaux Genre: Romantic Suspense Release Date: September 4, 2020   Blurb Dr. Neil Walker, M.D., M.F.T, Ph. D. I’m not your average therapist. As the founder of Imperium Security—the cover for my mercenary team—I’ve dedicated my entire life to helping heal those who’ve had their power unwillingly taken from them and avenging the ones who didn’t survive. A decade after creating the perfect team, I’ve now watched as every one of my […]

Finding a good romcom to read can be hard to find, writing one (I can only imagine) even harder, with everyone’s sense of humor being so different. Or maybe I am just picky. Then BOOM! That’s KD Robichaux kicking in the door with Dishing Up Love. Is there anything this woman cannot write? I have read several of her other books, from her debut autobiographical love story to her dark romances, and she always draws me in and holds me […] 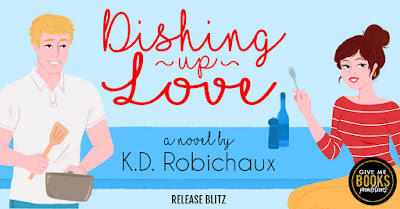 Title: Dishing Up Love Author: K.D. Robichaux Publisher: Boom Factory Publishing LLC Genre: Contemporary Romance Release Date: July 13, 2020 Blurb One hot chef One beautiful woman One chance encounter Mix and dish up some love Erin Bazzara is living life to the fullest as a single woman in New Orleans and making a name for herself as one of the top psychologists in the state of Louisiana. Years ago, she swore off men after receiving devastating news, news that […] 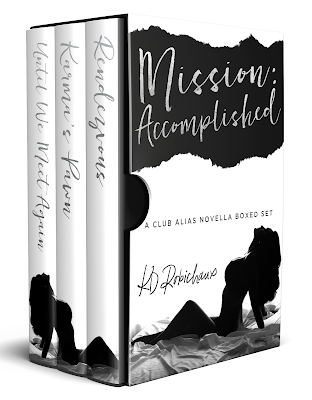 Cover Reveal Steal You: A Standalone Dark Romance Release Day: February 27th, 2018 Blurb: I was a good girl. Until you made me love you. You trained me to be your pretty little bird, my feathers spreading under your attention and praise. You promised you’d leave her. Swore it was me you wanted more than life. But then you broke my wings and silenced my song, and you became my obsession. I’ve spent years trying to figure out a way […]

Holy hell!! For this being KD Robichaux’s debut book I’m blown away by all the feelings I had reading it. This whole trilogy is actually based on Robichaux’s relationship with her husband. KD’s storytelling makes you feel as though your besties sitting around sharing a bottle of wine, as she tells you her and Jason’s story. You get so engrossed in what she’s telling you that you forget your glass and can actually picture everything, vividly. I have to say […]