Behind the Flame (Home in Carson, #3; The Everyday Heroes World) by Renee Harless
Series: Home in Carson #3
Genres: Firefighter

Things heat up. . . behind the flame.
From raging wildfires to losing his wife and daughter in a nasty divorce, Ridge Connelly has been burned. Fighting fires is in his blood, but fighting for his daughter is his reason for living.
When she’s left on his doorstep with a note from his ex to keep her safe, he takes Delilah home to North Carolina to protect her. From what. . . he doesn’t know yet.
A caregiver by trade, River Matthews has always put others first, ignoring her own needs, but her sexy new neighbor has her rethinking things where he’s concerned.
The dedicated single dad is needing a sitter and she can’t help but fall for the sweet baby girl or her daddy.
An unknown threat lurks in the shadows waiting to strike.
Just when things start heating up between Ridge and River, the past explodes around them, reminding him of everything that’s at stake.
Renee Harless' Behind the Flame is an alluring, sexy, suspenseful, small-town romance written in K. Bromberg’s Everyday Heroes Worlds project.

Behind the Flame is my first venture into Renee  Harless’s writing. This is a slow paced love story. Harless builds small towns, like I grew up in. So it’s a world I relate to. Both the main characters have just moved to Carson. I don’t feel like the story would work if it was a quicker pace. Small town are a slower living so the pace makes sense and works.

The build up to Ridge and River noticing each other is sweet. The chemistry between them is off the charts once they have their true first meeting (you know the one with swapping names lol). Harless has done a great job with her character development.

I enjoyed the suspense she wrote into the story and will gladly admit that for once I couldn’t guess who was involved or why. This, to me, is great as I hate knowing the outcome before the ending. I do wish she had used

If you are looking for a sweet and easy read to pass the time this is definitely a one click.

Truth, Lies, and Second dates was filled with witty banter, hilarious moments, and great characters. I truly enjoyed the mystery aspect that MaryJanice Davidson based the story around. I truly enjoyed the way Davidson’s characters acted. Tom was very blunt, sexy and didn’t lie. In all his actions you could see there was something about him, other than being highly intelligent. For anyone who knows or loves someone on the Autism spectrum you would recognize the signs. This wasn’t made […]

Hailey Faiman packs a punch with Hypocritically Yours. She sets a ton for Tennessee’s story in the first chapter. Being in a traumatic situation you would think that Tenny would run and hide from the world, and she does for a while, but when she comes back to life she does it with fierceness. Landry is suffering through life unhappy in every way that matters. Just living day to day until he is told to interview a young woman. Hypocritically […]

While I have yet to meet J.L. in person, we have been friends on Facebook for a while now. So I had to see what made this woman tick, and how she could put up with the online dating. Keep reading to find out the answers. 1. You started writing in December 2015, what have you seen change the most in the Indie community? Technically, I started writing waaay before then. Haha! I’ve been writing ever since I was a […]

Title: Doc A Club Alias Standalone Author: KD Robichaux Genre: Romantic Suspense Release Date: September 4, 2020   Blurb Dr. Neil Walker, M.D., M.F.T, Ph. D. I’m not your average therapist. As the founder of Imperium Security—the cover for my mercenary team—I’ve dedicated my entire life to helping heal those who’ve had their power unwillingly taken from them and avenging the ones who didn’t survive. A decade after creating the perfect team, I’ve now watched as every one of my […] 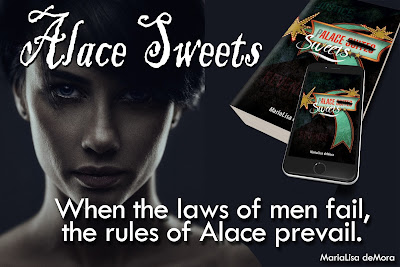 When the laws of men fail, the rules of Alace prevail. FREE LIMITED TIME DOWNLOAD Author: MariaLisa deMora Title: Alace Sweets Genre: Dark Romantic Suspense Series: Alace Sweets book series, book #1 Revenge really is sweet. ~Alace Sweets  A dark romantic thriller, this book is not a light read. Filled with edge-of-your-seat suspense, this intense story commands the reader’s attention as it drives towards the explosive ending.  Alace Sweets is a vigilante serial killer, with everything that implies and is sure […]

So I just binge read Fighting For This by Gwyn McNamee and OMG it was a heart pounding read! Once I started I could not stop devouring it. I stayed awake until 3 am. I didn’t want to stop until I had finished it. This read had me on edge. Gwyn has incredible character development. You really get to know who she is writing about. The story is written in both main characters perspective and it flowed wonderfully between them. […]

Etched in Stone is Liv Arnold’s debut book which shocked me. She has found her niche so early in her career. I found Etched in Stone to be a book that while listed as suspenseful romance was so much more. Her characters are relatable, fun, and believable. You want to be in this world that Arnold has created.  Vanessa has just graduated college and accepted a job offer at her dream place. It looks like the fates are in her […]

Being an a blogger who deals with mainly Indie authors is amazing. I get asked by new (to me or debuting) authors to read their works and give my input. I have been able to find authors that I may never have heard of before or that I’ve followed from afar. I am pretty blessed in that aspect. I actually set up a way to have authors send me requests to review their works through my blog. This is how […]