Asher Raine wanted nothing more than to be a lone wolf, traveling from place to place and living life as he pleased. He may have always dreamed of having a mate, but he never believed the romantic tales he’d been told about finding your one true mate. All he wanted to do was be free of the pack his uncle and his father had run into the ground. That was until the day he returned home to find something tragic happened while he was away and laid eyes upon the most beautiful female shifter sitting behind the window at the pack healer’s clinic. Alyssa Waters was perfectly fine living out the life she had planned for herself. She’d dreamed of finishing nursing school and working at one of the big hospitals in Los Angeles. Never living life in a pack like most werewolves did, her family always saw fit to come and go as they pleased, never being tied down in one place. All of that changed when her uncle called her for help in his clinic for the Raine pack. It wasn’t something she really wanted to do, but the day she saw Asher Raine standing naked through the glass doors of her office, she didn’t think being stuck in the middle of nowhere Mississippi was so bad after all. While trying to make things right with the pack that had been broken by his uncle, Asher never expected to find his one true mate. After all the evil dealing and broken promises his uncle made. Will Asher be able to stand up to him and take back the pack he’d never wanted in the first place? Or will Asher and Alyssa be destroyed by the evil doings of his uncle?*Intended for a mature audience.

I’m not new to the Rogue Enforcer world but with each new author that writes in the series my favorite author list grows. Livell James is no exception to that.

James has grown the RE world to include Asher, a man who doesn’t think love exists for him. A man who never seems to be on top even though he has untapped abilities. He’s stuck in a pack whose Alpha is corrupt.

The plot line keeps you turning the pages. Finding out if Asher can escape or even find lasting love in all the chaos is what had me up all night to finish.This is a must read for me and I highly recommend Asher to anyone who is looking for a top notch paranormal romance read. Livell James has yet to let me down.

Carsyn is a novella based in the Rogue Enforcers world. Beautifully written with amazing world building. When shifter kids are disappearing at an alarming rate Carsyn is sent to team up with Kingston. Carsyn and Kingston are on the hunt for those that are missing. Hoping to reunite them with their families. As their mission continues you have to wonder if they will get their HEA or if they will be separated before they have truly begun. Will they find the […]

Estuary is the third book in The Derivation Series. First let me tell you that this series is amazing and must be read in order to understand the full story. Estuary brings in more characters that I feel are going to be extremely important to the whole story. I can’t express how amazing the world building and character growth is in this series. There is heartache, love, loss, magic, and so much more to devour. I am willing to admit […]

Are you a fan of Twilight? Do you have a thing for the paranormal? If you answered yes to either of those questions you have to dive into Eternal Curse. Kara Leigh Miller has weaved this magical web around her book to keep you trapped. She has bypassed (in my humble opinion) Meyer in this series. Chloe Madison is a teenager that you just want to hold and nurture. She has lost her mom during what every person knows is […]

If you are new to Kristine Allen, be prepared to hold on tight for this ride. Allen is known for her MC romance book but Angel pushes her from amazing to phenomenal. Taking a leap into the paranormal MC was just what she needed to do. Bringing her wicked insight into a new genre adds even more spice to her stories.   As always Kristine Allen sweeps in to her world with just her prologue. She makes your heart hurt, […]

Thalia Corner (Men in the Woods series, #1) by Patti Jean  Genre –  Paranormal Romance BLURB –  Living in a town shrouded in mystery, the locals spoke of the dangers inside the trees and trained everyone to stay away from them. Thalia Corner is a town like no other. Elly’s childhood still scarred her decades later. Something drew her to the dense woods surrounding her town and had since she was a little girl.  Things happened in those woods. Dismissed […]

✘✘ ON SALE until August 31st ✘✘ Tiger’s Last Chance by Christina Lambert  Blurb: While working a case, Sean Whitman is tortured for information, drugged, and bitten against his will by a shape shifter. The fallout leaves him jobless, friendless, and dumped by his girlfriend. Needing a fresh start, he leaves town and opens a private investigation business. Learning to live life sober isn’t easy, but he makes it to the two year mark. When Detective Nikki Jackson with the […]

⇀ ⇀ Release Boost ⇀ ⇀ Tiger’s Last Chance by Christina Lynn Lambert  Blurb: While working a case, Sean Whitman is tortured for information, drugged, and bitten against his will by a shape shifter. The fallout leaves him jobless, friendless, and dumped by his girlfriend. Needing a fresh start, he leaves town and opens a private investigation business. Learning to live life sober isn’t easy, but he makes it to the two year mark. When Detective Nikki Jackson with the […] 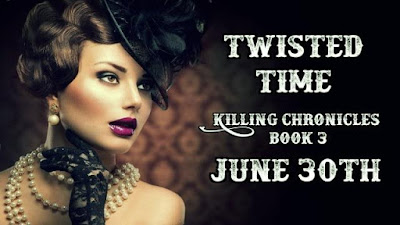 ´¨)¸.•´¸.• ´¨) ¸.• ‘¨) (¸.•´ (¸. NEW RELEASE ⏰  TWISTED TIME ⏰  Author Candi Fox Series: The Killing Chronicles Genre: PNR/TimeTravel/Old West ❥☆❥ ORDER NOW ❥☆❥ Available on #KindleUnlimited Purchase Link: https://amzn.to/3e4gEcR Her lover lies in a magickally induced coma after being brutally attacked by an unknown creature. Emma convinced the only way to save him is to somehow travel back in time to 1875 to prevent the creation of the creature, places her trust in a woman who turns […]

?? NEW RELEASE ?? Storm of Flames by Kira Nyte  The Firestorm Dragon Chronicles Book 3 ? Order Today ? Amazon link: https://amzn.to/396rcVp Available on #KindleUnlimited ? Blurb Skylar Donovan was raised to trust no one but herself and her parents. Moreover, her father gave her all the tools she’d need to survive, both in practical terms and as a martial arts instructor in his respected studio. What he didn’t teach her was how to go on when his murder […]