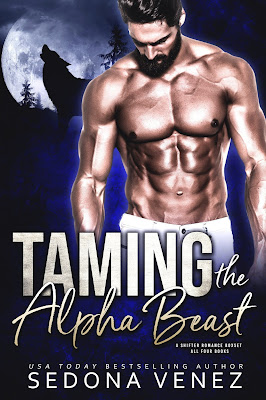 Blurb:
This beautiful box offers FOUR books in the action-packed Alpha Shifter Romance series.
Love powerful women, steamy love scenes, heart-pounding romance, and piles of sexy shifter secrets? Then you’ll love this adventure-packed alpha shifter romance box set!
** Breaking the Storm
** When Lightning Strikes
** Taming the Beast
** Reason to Love
BREAKING THE STORM
A fae witch with a curse, a rock star with a secret, and a covert group set on creating a master race…
Stormy has lived her life dreading her curse.
True love for the fae witch means certain death for the man who holds her heart. Five years ago, she left sexy rock star Knox to save his life and hasn’t spent a single day without thinking about him. When her escort service for paranormals puts her face to face with him again, her passion erupts, but so does the surrounding danger.
With the Shadows closing in after her bloodline, will Stormy’s curse end her chance at happiness with Knox?
Or will the rocker’s secret save her from a fate worse than death?
WHEN LIGHTNING STRIKES
A cursed witch, a wolf shifter and her sworn enemy, one tangled romance that could change everything…
Lightning Credence knows she’s destined to succumb to her family’s curse… to kill the man who dares to love and claim her.
When her business begins to crumble, only one person can come to her rescue.
Unfortunately, it’s wolf shifter Ryker Alfero, the man she hates with almost as much passion as she wants him.
Ryker doesn’t just want Lightning, he wants to own her.
He’ll stop at nothing to prove the witch belongs to him in every sense of the word.
But when The Shadows set their sights on Lightning, his focus shifts from claiming her to saving her.
TAMING THE BEAST
She’s something more than human. He’s searching for his mate. Their desire collides with a sinister plot.
Hope Pippa knows her life is missing something. The curvy dancer has hardened her heart to avoid being hurt, even if it means denying her fantasies about tiger-shifter Elijah Beastie.
Elijah is on the prowl for a mate.
When he meets Hope, his animal nature will stop at nothing to have her, even as he suspects there’s more to her than meets the eye.
He seeks to capture her heart as she makes an incredible discovery that changes not only their lives but their world forever.
Can their new love survive the truth of the new world they’ve unleashed, or will the forces working against them bring an end to their happily ever after?
REASON TO LOVE
Vampire princesses can’t be tamed… unless it’s by a dominant Alpha desperate to make her his mate.
Reason Orlov, the headstrong daughter of the vampire king and black sheep of her coven is determined to make her own path in life.
While her father wants her married, pregnant, and out of the way, Reason isn’t interested in any of it…until a sexy wolf comes in to demand her submission.
Jack “Jackal” Alagona hates vampires after they took what was most precious to him, but when he meets Reason, a passion erupts between them that cannot be contained.
Love between vampires and shifters is forbidden, but Jackal and Reason know what fate demands.
When Reason must break the covenant in order to save Jackal’s life, she puts her own in jeopardy.
Can their love survive the tumultuous world of paranormal politics or will they be driven apart forever?

Review: Tapping Out by Nikki A