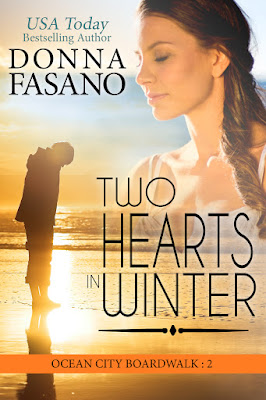 Loss and betrayal have caused Heather Phillips to give up on love. She’s thrown herself into running The Lonely Loon, her Bed and Breakfast located on the boardwalk of Ocean City, Maryland. The “off season” in this tourist town is usually a time of rest and reflection for her; however, DB Atwell, a famous author, arrives at The Loon for the winter to finish his long-overdue novel. Daniel, too, has faced grief, and tragedy continues to haunt him. Once Heather and Daniel meet, their lives will never be the same.

Reminiscent of Nights in Rodanthe by Nicholas Sparks and culminating in a happily-ever-after similar to the great Nora Roberts, Two Hearts in Winter is a story about learning to let go of the past, about realizing that, though hardship affects us, it need not define us, and about coming to understand and truly believe that beauty is sometimes covered in scars. The human heart has an amazing ability to forgive, to heal, and to hope, especially when touched by love.

What are you reading now or what do you have in your TBR pile?

I just finished Learning to Swim by Sara Henry. I’m currently reading Julia’s Daughters by Colleen Faulkner. On my TBR pile you’ll find A Reluctant Hero by Jackie Weger, Creatus by Carmen DeSousa, The Neighbor by Dean Koontz, Three Junes by Julia Glass, One Way or Another by Elaine Raco Chase, Love Me Tender by Mimi Barbour…should I go on?

What flavor is your writing style?

I always tell people I write cotton candy for the mind. Think back to when you were a kid and you took a bite of that delectable confection. What did you do? You smiled. That’s what I’m going for in my romance novels.

Was writing always the first thing you wanted to do in life?

No, I wanted to be a teacher, but then I met and fell in love with my husband. We married and began raising a family. It wasn’t until my children started school that I started writing.

While you were writing, did you ever feel as if you were one of the characters?

I believe there’s a lot of me in my protagonists. I write about women who are strong, yet vulnerable. My main characters and my secondary characters have flaws and make mistakes (don’t we all?), but then most of them do all they can to learn, grow and become better people.

Do you have any advice for other writers?

One piece of advice I often give to writers is to READ. Don’t just read in the genre in which you write. Read everything. And then figure out what you liked and what you didn’t…and then think about why. Reading and analyzing the writing of talented people can help you perfect your own skills.

Do you have anything specific that you want to say to your readers?

I bow down to readers! I am so appreciative that they spend their hard-earned money on my books and then take the time to read my stories. I am so blessed to have a job I love, and I wouldn’t have this job if there weren’t readers who love romance novels.

What inspired you to write your first book?

I came to writing through my love of reading. I spent many a Saturday as a kid in the local library. I loved books, but I never imagined I would ever write one. My husband gets the credit for my becoming a writer. When my children started school and I decided to find a part-time job, he looked around at the piles of romance novels in our home and said, “You’ve read a lot of those. Why don’t you try writing one?” So, you see. It’s all his fault.

If you had to do it all over again, would you change anything in your latest book?

Not my latest book, but one of my titles—Where’s Stanley?—features an ending that I didn’t come up with. I handed in the completed manuscript, and my editor suggested a different ending. I wasn’t happy, but I did as she asked. Personally, I think the book suffered for it, but readers seem to enjoy the story.

What books have most influenced your life most?

Old Yeller, Sounder, The Bell Jar, To Kill a Mockingbird…how can people read these books and not be influenced? There are so many titles that inspired me and moved me, molded and shaped me, there isn’t time to name them all. The characters in these wonderful books help young readers to decide what kind of individual they want to be.

Do you ever experience writer’s block?

There was a time when I’d have said no. I have a plant-your-butt-in-the-chair-and-the-words-will-come attitude. But I did suffer writer’s block while my dad was battling cancer. It’s difficult to write feel-good happily-ever-after when your beloved father is dying.

Do you write an outline before every book you write?

I do, yes. I equate an outline with a road made; how do you know where you’re going if you don’t have a map? I might write the first chapter or two on the fly, but I always take the time to plan out where I want the story to go. Now that’s not to say that the characters are going to stay on the straight and narrow. They decide to veer off the highway every now and then, and that’s when I have to do a quick reroute.

Have you ever disliked something you wrote?

I’ve never published anything that I disliked. I have started projects that haven’t seen the light of day, either because I couldn’t figure out where to take the story, or I couldn’t make the protagonist sympathetic or likable. It’s a rare occurrence, and when it happens, I just set the story aside and hope I can someday come up with a solution.

Tell us why you’ve decided to set a series of book at a seashore location.

I love the ocean. There’s just something about a large body of water that induces a great calm in me. I think many people feel the same, so I decided to come up with a series that involves three women friends who live and work in Ocean City, Maryland. The first, Following His Heart, is Sara and Landon’s story. The second, Two Hearts in Winter, is Heather and Daniel’s story. I’m currently plotting out the third book of the series.

“The worst of it was the stroke of midnight.” Heather sighed. “Everyone got a New Year’s kiss but me.”

The tone of his voice had her gaze lifting to connect with his. Merriment sparkled in his eyes. Was he laughing at her? Poking fun?

She slid her fingers from between his forearm and hand, meaning to pull away from him, from the situation that could very quickly turn both awkward and embarrassing for her. Feeling vulnerable was not something she enjoyed. She mentally kicked herself for not keeping the conversation light and fluffy. That’s what he’d expected, wasn’t it? It’s the only kind of conversation that most guys liked. Nothing too intense. Nothing too sensitive. Frivolous. Insignificant. Superficial. That’s what—

He reached out and captured her jaw between his gentle fingers, and she went stock still. With light, steady pressure, he guided her toward him. With excruciating slowness, he leaned forward.

He was close, so close she could feel his warm, vanilla scented breath against her cheek.

What the hell was he doing? She should stop this. She should place her hand on his shoulder and give a good, hard push. But her muscles had gone all spongy and useless. She had no idea what he planned to do, but every cell in her body wanted him to do it.

Daniel tipped up her chin and closed the small gap between them.

His lips were soft and hot against hers. The kiss was—

…over before she had a chance to really enjoy it.

“Everyone deserves a New Year’s kiss.”

His silky soft voice sent shivers spiraling down the full length of her body. She felt giddy, and drunker than any rum runner could ever account for.

Before she could finish, his mouth was on hers again. This kiss was longer, more lingering, and teetered on the edge of hungry.

When he broke away, Heather heard a strange whooshing, and she realized it was the sound of her blood throbbing at a wild rate through her veins. She swallowed, exhaled slowly, and blinked.

He smiled broadly. “That,” he told her, “was for telling your friends that I’m perfectly nice.” 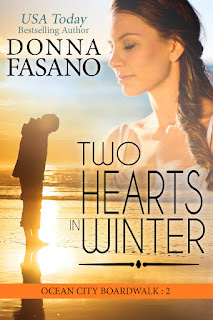 Reviews of Book 1: Following His Heart

“The pleasure of Fasano’s style lies in the scrumptious descriptions… and her characters’ sincere, mature desire to make things work.” ~ Publishers Weekly

“Following His Heart made me go “wow”. . . I found it thought-provoking in ways I’d have never anticipated.” ~ BooksAndPals.com, 5-Stars 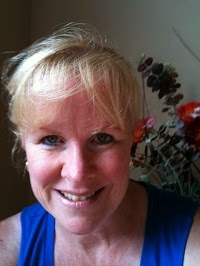